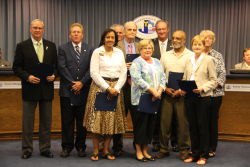 This committee began as a City-only group, but was expanded to include all of Onslow County. The City of Jacksonville continues to have certain seats which are allocated for appointment by the City Council. All other seats are appointed by the Onslow Board of Commissioners. Two members must be elected leaders and Councilman Jerry Bittner and Commissioner Jack Bright serve in those roles for the Committee.

The Committee evaluates our community’s civic infrastructure using a civic rating index and recommends strategies for addressing community needs. In addition, the group is charged with civic education and advancing cooperative and collaborative efforts. Annually, the committee plans the Patriot Day and 9/11 ceremonies, as well as make other civic presentations.

Want to join this committee?

Fill out the application to set up an appointment.